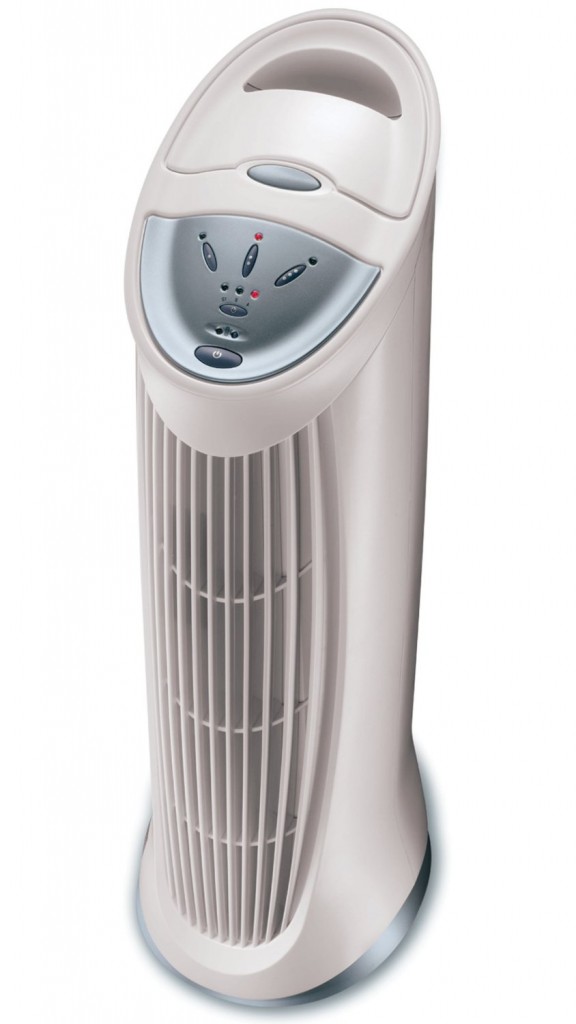 See on Amazon
Summary
The Honeywell QuietClean HFD-110 is adequate for small, dusty rooms and is a nice purifier for people with very limited budgets.

But the device suffers from misleading marketing gimmicks, and the performance leaves a lot to be desired. Bottom line: there are better options out there for less money.

Today we’re talking about the Honeywell QuietClean HFD-110. This is a pretty inexpensive air purifier, but it has some big flaws.

As you’ll see, the unit is fine for certain purposes, but inadequate for others. Let’s talk more about it.

I want to start here, because this device gives us an important lesson for all air purifier shopping: do your research, and don’t take marketing claims at face value.

If you look on this unit’s Amazon page, you’ll see something interesting: the claim that this device has a HEPA filter.

It certainly caught our eye. But we suspected something was “off”, and a little digging confirmed our fears.

This device does not use a HEPA filter; it uses a “HEPA-type” filter. If you’re in the market for an air purifier, you should know the difference because it’s an important variable in your purchasing decision.

HEPA vs. HEPA-Style (And Why It Matters, A Lot)

To be certified HEPA, a filter must pass a series of tests and standards set by the United States Department of Energy. In essence, the filter must be able to remove 99.97 percent of particles that have a size of 0.3 microns.

A HEPA-type filter – specifically, the filter installed on the QuietClean HFD-110 – has not met those standards, and only removes about 99 percent of all particles.

Further, when it comes to air pollutants, the hardest stuff to get is also the smallest – and the smallest stuff is often the most dangerous.

The point of a HEPA purifier is that it can tackle just about the smallest particles imaginable, and get rid of a bunch of the worst stuff in your air.

A HEPA-type filter can brag all it wants about capturing 99 percent of particles. But the 1 percent it leaves behind is often the stuff you really want to get rid of.

Since we’re on the subject of microns: the QuietClean HFD-110 is a good purifier for tackling some of the larger particulates that plague your air. We’re talking human hair, pet fur, dust, pet dander, and some others.

In terms of coverage area, the Honeywell QuietClean HFD-110 is designed for bedrooms or small living rooms; anything around 10 feet x 12 feet.

I’d include small kitchens, as well, but I’m not sure this device is a great fit for kitchens, as it seems to struggle with odors. That includes cigarette smoke, but it also includes run-of-the-mill kitchen smells – onions, fish, etc.

You can try to use it in larger rooms, and it might work for dust/hair purposes. But this device will almost certainly struggle to do any meaningful purification in rooms larger than 200 square feet.

Another important note: the QuietClean HFD-110 is an ionizing purifier, which means it emits ozone in very small amounts. The only people that really need to worry about this is people with existing respiratory issues – if that’s you, I would look for a different air purifier.

Design and Everything Else

The device is fairly quiet, although it gets much louder on its highest setting. I’d label the “performance to noise” ratio as adequate.

All in all, I’m not overly impressed with this device. It’s perfectly fine as a “budget buy”, and it works as a supplement to dusting your room.

But overall, I actually think there are better, cheaper options (including the Honeywell HFD-120-Q, which is less expensive and more powerful).

The Honeywell QuietClean HFD-110 is adequate for small, dusty rooms and is a nice purifier for people with very limited budgets. But the device suffers from misleading marketing gimmicks, and the performance leaves a lot to be desired. Bottom line: there are better options out there for less money.