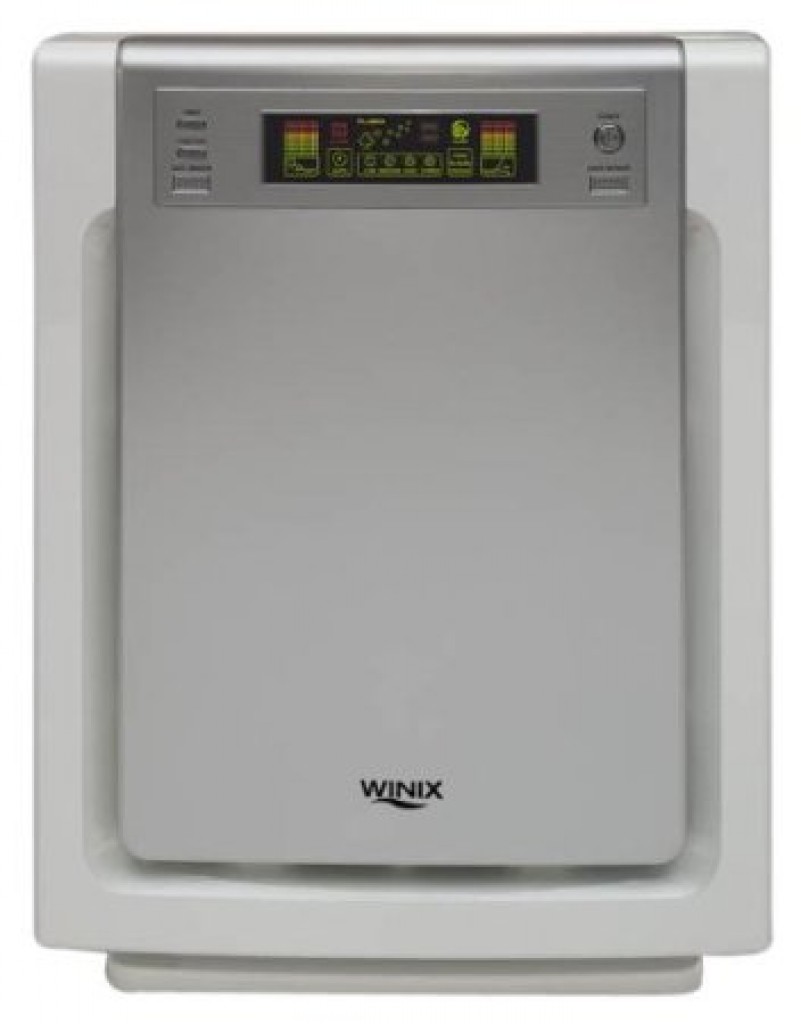 The device is a great match for people struggling with allergies, but doesn’t perform as well when it comes to entrenched odors.

This is the first time we’re reviewing a Winix air purifier. This brand is extremely popular in Korea, but it’s certainly not a household name in the U.S. (yet), at least not on the scale of heavy-hitters like Honeywell.

But, as it turns out, it doesn’t need to be. The Winix WAC9500 may look like a sleek mini-fridge at first glance, but this is a great device; let’s dive into the reasons why.

This is a very impressive unit in several ways. The Winix WAC9500 has a five-stage filtration process, which is as follows:

Here’s the thing about purifiers that claim to be anti-microbial: it’s more of a marketing gimmick than anything. The vast, vast majority of bacteria and diseases are transferred through human-to-human contact (shaking hands, coughing, etc.). You really don’t have to worry about these things lingering in the air.

The Winix WAC9500 isn’t the only air purifier guilty of this gimmick; a bunch of other devices do the same thing. No harm, no foul.

Gimmicks and fancy names aside, let’s focus on what’s important: does the purifier do its job?

The answer is yes; it does its job very well. The pre-filter takes care of the big stuff (hair, fur and dust), then the HEPA filter tackles the much smaller stuff. The carbon filter leaves a bit to be desired (I’ll get into that later when I talk about how the device handles odors), but the PlasmaWave technology is a very cool touch.

Here’s what the manufacturer has to say about the PlasmaWave technology:

Other Ionizer type air cleaners produce ions to attach to pollutants so they fall to the floor or stick to walls and furniture and then need to get vacuumed. PlasmaWave however doesn’t merely weigh down the particles – it breaks apart odor, allergens, chemical vapors and other pollutants at the molecular level without producing any harmful ozone.

My magnifying glass isn’t that great, so I can’t tell you whether this actually happens. All I can tell you is that the device performed exceptionally well in a test room.

Here are the unit’s CADR ratings:

Those ratings are interesting to me. Personally, I believe the Winix WAC9500 to be least effective against odors and smoke – although the CADR rating suggests otherwise.

The device can certainly hold its own against run-of-the-mill odors lingering in medium-sized rooms: cigarettes, wet dog, etc. But if the odor is already well-embedded into the room, this device is going to have some trouble getting rid of it.

But the WAC9500 proved to be extremely effective against allergens, dander and fur, as well as dust. And this held up for medium-sized rooms just as well as smaller areas.

The official coverage area of the device is 284 square feet, or a medium-large room. That number holds up; this device is built for medium-sized living rooms, and works even better in smaller spaces.

I will say that anything larger than 284 square feet might be a stretch for odor removal; it’s the device’s one weakness as far as performance goes.

Design, Energy Efficiency and Everything Else

Admit it: the Winix WAC9500 looks like a mini-fridge at first glance. But when you look close, I actually think the device boasts a very intelligent design. It’s a bit bulky, but it’s fairly thin so it doesn’t take up that much space.

Further, the device has a sleek, clean control panel where you can see visual displays of the levels of odor and dust in the room.

There are four fan speed settings; depending on the setting, this unit will use between 8 watts and 70 watts. In this respect, it lives up to its Energy Star rating; the efficiency will allow you to leave the device on overnight, or when you leave the house, without killing your energy bill.

The device is quiet as well, at least on the lowest three settings. The highest setting is when things start to get noisy.

Overall, I’m a big fan of this device. This is a very well-performing unit with a series of nifty features, including visual displays of a room’s odor and dust levels. The device is also exceptionally energy efficient and quiet.

My only gripe is that it didn’t work as well as advertised on odors.

The Winix WAC9500 is a well-designed unit that boasts strong performance, energy efficiency and several nifty built-in monitoring features. The device is a great match for people struggling with allergies, but doesn’t perform as well when it comes to entrenched odors.